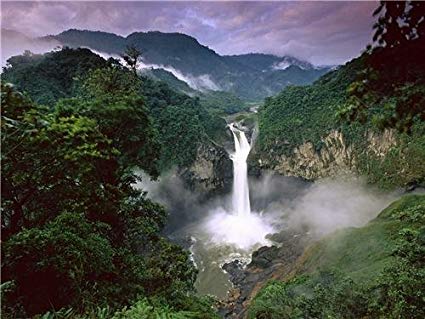 Davos-Klosters, Switzerland, 23 January  – The pace of deforestation in the Amazon, coupled with last year’s devastating forest fires, has pushed the world’s largest rainforest close to a tipping point beyond which it will turn from a carbon sink to a carbon source.

Without immediate action to halt deforestation and start replacing lost trees, half of the entire Amazon rainforest could become savannah within 15 years, according to Carlos Afonso Nobre, Director of Research at the Brazilian Academy of Sciences.

The Amazon’s tropical forests create 20%-30% of their own rainfall, so preserving them is as vital for regional weather systems and food production as it is for stabilizing the global climate. “Deforestation is now at 17%,” said Nobre, “but if it exceeds 25%, we will cross the tipping point.”

Colombia has stepped up to the challenge, setting targets to plant 180 million trees and reduce deforestation by 30% by 2022. President Ivan Duque told a packed hall that “the greatest challenge of our time is climate change”.

In September 2019 he convened the Leticia Pact of seven Amazon countries whose presidents have personally committed to work together to protect the rainforest.

“We have to defeat deforestation,” said the president, whose country is 35% rainforest. He has also launched a strategy of Biodiverse Cities, in which Colombian cities within forest areas will develop circular economies to protect biodiversity and the environment.

“Thirty-four million people live in the Amazon,” said Duque, adding: “We need those societies to be able to preserve themselves and preserve forest ecosystems.”

Al Gore, Vice-President of the United States (1993-2001); and Chairman and Co-Founder, Generation Investment Management, agreed that indigenous people and their knowledge must be respected.

For centuries people have made a way of life in the Amazon that is not destructive. While poverty in the region needs answers, Gore said that clearing the rainforest to plant crops is a “false hope” as the richness of the rainforest is in the canopy and its wildlife, not in its thin soils.

Nobre has developed the idea of an Amazon Third Way in which modern technology taps into and develops traditional wisdom to create a new bioeconomy.

The acai berry, for example, brings over $1 billion into the Amazon economy. It is second only to beef in terms of value yet uses just 5% of the area taken by up cattle ranches – making the berry 10 times more profitable than the beef.

Solutions need to be global as well as local. Nobre called on assembled business leaders to support global supply chains that are deforestation-free and to promote the emergence of a new bioeconomy.

Emphasizing the sense of urgency, Gore declared that “the climate crisis is way worse than people generally realize and it’s getting worse way faster than any of us realize”. He called on politicians in particular to rise to the challenge: “This is Agincourt, this is Dunkirk, this is 9/11,” he announced with passion.

Fellow panellist Jane Goodall, famous for her work with chimpanzees and community development across Africa, called on all of us to get involved in the World Economic Forum’s 1 Trillion Trees Initiative.

She said we need ways of compensating people for looking after tropical rainforests on our behalf, as currently we are not paying for forests despite needing them everywhere. She cautioned people against making the tone of the debate too “doom and gloom” and left the hall with this message: “Give the youth hope, because if you lose hope, you give up.”

The World Economic Forum Annual Meeting 2020 is taking place from 21-24 January in Davos-Klosters, Switzerland. The meeting brings together nearly 3,000 global leaders from government, international organizations, business, civil society, media, culture, foremost experts and the young generation from all over the world, at the highest level and in representative ways.

Convening under the theme, Stakeholders for a Cohesive and Sustainable World, participants are focused on defining new models for building sustainable and inclusive societies in a plurilateral world.

The meeting engages some 50 heads of state and government, more than 300 ministerial-level government participants and business representation at the chief executive officer and chair level.

Wuhan ‘sealed off’ due to virus outbreak – Health Ministry

What you need to know about ‘Super Tuesday’