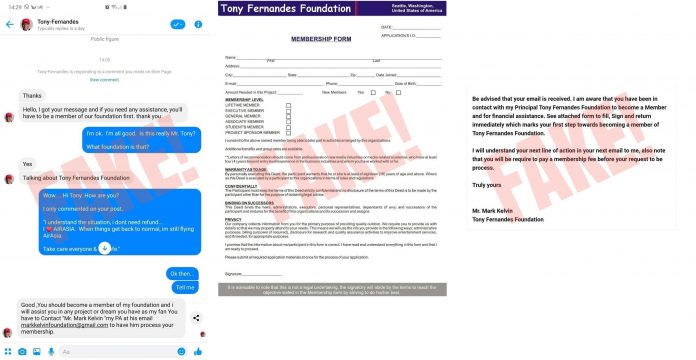 SEPANG, 13 April 2020 – AirAsia would like to bring the public’s attention to a scam on Facebook which has been using the name Tony Fernandes and citing a Tony Fernandes Foundation offering opportunities to assist in projects in exchange for membership of the fictitious foundation.

Members of the public are advised to be cautious and always refer to AirAsia’s official social media channels for the latest company news in respect of such matters. AirAsia will never request your personal data or details without specific and lawful measures in place.

When in doubt or to report suspected scams involving AirAsia, please get in touch with us via the following official communication channels:

AirAsia will not hesitate to take legal action against individuals or groups who purport to use the  AirAsia brand or fraudulently or commit identity theft.

Members of the public are advised that AirAsia shall not be held liable for any claims arising from schemes in which it and any of its authorised officers/employees have no involvement.