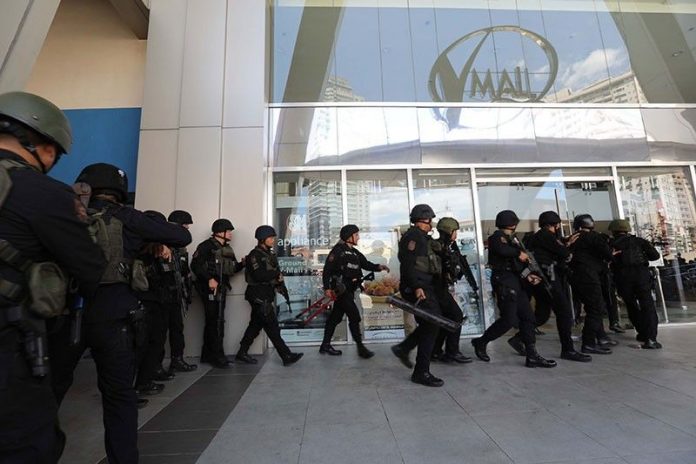 Heavily armed police were in a standoff Monday with a disgruntled former security guard who took at least 30 people hostage in a Philippines shopping mall.

Workers and customers streamed out of the V-Mall shopping centre in Manila early Monday after gunshots rang out and armed officers rushed to the scene.

“We have confirmed reports of… a hostage-taking of some of our employees by a former… security guard,” the mall management said in a statement.

Manila’s malls are centres of life that include everything from restaurants and shops to churches and medical facilities. The building was full when the violence began.

The mayor of the section of Manila that is home to the mall told reporters the “disgruntled” ex-guard had a pistol and claimed to have a grenade, but that hadn’t been confirmed.

“At present we are unable to determine exactly how many are inside. Our estimate is around 30 people,” said San Juan city mayor Francis Zamora.

He added the hostages were being held in the mall’s administrative offices and at least one person was shot. The victim was rushed to hospital and was in stable condition.

Authorities have begun negotiating with the hostage taker, who has demanded to speak with other guards and the media.

Manila was the site of high-profile 2010 hostage taking that ended in the deaths of eight tourists from Hong Kong.

That day-long ordeal started when an ex-police officer, armed with an M-16 assault rifle, hijacked a bus near Rizal Park, a popular tourist destination just a few blocks from police headquarters, in a desperate bid to get his job back.

Scotland Yard commissioner talks about how technology is helping to fight...