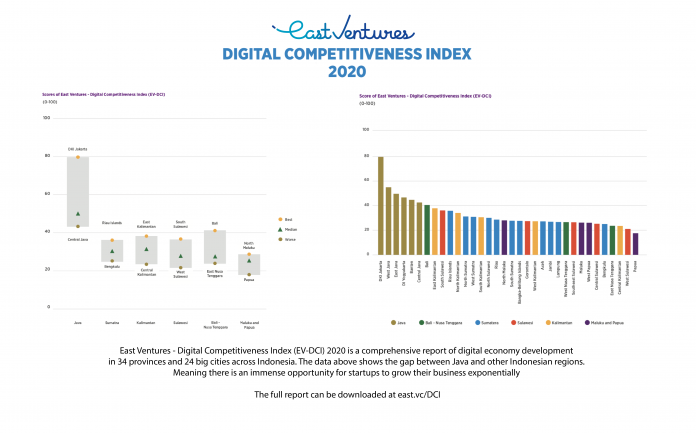 The report outlined a picture of a digital divide in Indonesia, one of the fastest-growing digital economies in the world.

The disparities between the rapidly developed digital ecosystem in Indonesia’s urban area and the regions beyond it show that Indonesia’s digital journey has just begun.

East Ventures Digital Competitiveness Index (EV-DCI), a measurement that factors in 9 aspects relating to digital development, shows that the majority of Indonesian is ready to adopt digital services due to high smartphone ownership and internet access.

Yet, EV-DCI’s score for human resources and entrepreneurship is still low. Meaning, only a small number of Indonesians are utilizing technology to open businesses or improve productivity.

The digital divide also shows that the fast-growing internet-based companies that operate in the Indonesian market (six of those are unicorns), serves only a fraction of Indonesia’s economy.

By scaling up and extending their services across the archipelago, those companies have an immense opportunity to grow their business exponentially.

Some key highlights of the report:

The financial industry is one of the most affected by digitalization in Indonesia. In areas with a high EV-DCI score, banks close their branch offices at a faster rate. EV-DCI score is also correlated with a high disbursement of credit by fintech lenders and the number of branchless banking financial agents.

The growth of the digital economy creates a more competitive talent market which produces a pool of skilled workforce. Though areas with high digital competitiveness tend to absorb more of these professionals and skilled workers.

Several jobs such as administrative work, machine operators, and laborers are expected to be impacted the most by digitalization. Evidently, the number of these workers in the ICT, finance, and transportation industries has been facing the sharpest decline.

Digital competitiveness in areas prepared to be the ‘New Bali’ such as Labuan Bajo, Lake Toba, Raja Ampat, Borobudur Temple, Mount Bromo, and Morotai must be improved in providing access to information, comfort, and attractiveness for foreign tourists.

Willson Cuaca, Co-founder and Managing Partner of East Ventures explained, “The digital economy promises inclusivity and equal economic opportunities for all Indonesians. However, Indonesia is often times only assessed from the development of certain big cities like Jakarta, while there are still many cities untouched by the promise of the digital economy. By allowing everyone to participate in the digital economy, Indonesia could convert demographic bonuses into demographic dividends; turning potential into reality.”

The full report can be downloaded at east.vc/DCI

WHO officials say at least 20 coronavirus vaccines are in development in global race...

India’s response to the coronavirus impact could include cash transfers to...